“I give them a safe place to rough house and learn how to use their bodies” states Ryan Daly—the play therapy leader at Nonviolence Works. For the past three years, Daly has been leading the Familia Y Mundo therapeutic after-school program participants in activities designed to get them moving and learn body awareness. 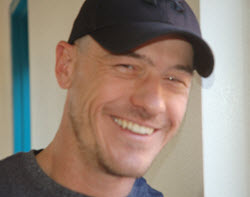 Daly and the FYM staff see dramatic differences in the students that participate. As he enters the classroom he notices youth who are “shut down”—even with their heads down and not talking. After a period in the play therapy activities—they are vibrant and smiling with happiness. Daly knows that this contrast is partly due to the advantage he has of seeing them after a long day in the classroom—often sedentary—and the chance to play and move is rewarding.

Daly’s objectives for his students are to learn how to use their bodies in positive ways—to build the self confidence that comes with succeeding in both play activities such as “Statue” or Dodge Ball—but also to learn how to work in teams. Often a student who appears quiet and shy in the classroom environment will emerge as skilled and confident in the activities Daly presents.

For the older youth, Daly creates a safe place to wrestle or rough house with clear guidelines and demonstrations of skills. Students pick a partner with whom they want to test their skills and then practice various positions and self-protection techniques. Daly teaches them how to deal with physical threats and learn “no holds” techniques to defend themselves. Some of this work is based on the anti-bullying curriculum that Daly and fellow NVW staff member Zach Garcia have used in the Gang Resistance is Powerful (GRIP) program presented in the Taos schools.

Beginning with tae kwon do classes as a four-year-old in Clovis, New Mexico, Daly is a lifelong participant in the martial arts. Since his father was in the military, they moved often, and he would take whatever classes were available—tai chi, judo, karate, jujitsu, tae kwon do, wrestling as well as yoga and meditation, etc. From these experiences he creates appropriate activities for each level of students he teaches.

Daly wants the youth to learn to respect their bodies and become skilled in movement and self-confidence. Since he teaches both girls and boys, he has an opportunity to see differences in the male and female approaches to his movement activities. He believes that they reflect messages they each receive from our culture.

Boys tend to make assumptions about what they know and are discouraged if they are not skilled immediately. They also tend to use more force and concentrate on power and cunning. Daly observes that girls tend to be less confident of their skills and show focused attention on learning. They pick up the skills more quickly, therefore, and show more flexibility in the positions and actions they use.

Daly comments on differences in how boys and girls react to losing or not being successful at a new skill. While girls tend to analyze what happened and want to know how to do it differently the next time, boys are often upset about losing and may cry. Messages from the culture that boys should always be physically skilled may be powerful blocks to this new learning.

Successful students in the play therapy program learn body mindfulness and respect for their physical skills. Daly knows that students are in group settings where there are clear power struggles. Self-respect and skill development are critical skills that Daly imparts to his students.

Daly and his brother David Symington are the owners of Defend U Academy offering classes to all ages.

Nonviolence Works has the largest behavioral health staff in northern New Mexico. For more information or to make a donation, contact us at 575-758-4297 or www.nonviolenceworks.us.

Mary McPhail Gray is the board chair of NVW and can be reached at mcphailconsulting@gmail.com or 575-779-3126