You are here: Home / Mary's Columns - Taos News / “I would have been dead on the street—”

“ . . . were it not for my father and my wife. I was deeply into drugs—selling and using—and in gangs and any street adventures I could find,” says James Mondragon, Educational Assistant at Nonviolence Works.

Mondragon was the oldest of five boys, and the family moved around a lot—Utah, Nevada and New Mexico. Both parents were drug addicts, and abuse and violence were daily occurrences.  “My mother decided to get herself clean so she left all of us and moved away.”  Later Mondragon’s father decided he also wanted to get clean, so he moved the boys to Taos when James was a teenager.

James hated it.  He didn’t know anyone and didn’t have his usual contacts, so the minute his dad left the house on any errand, he slung his backpack on and headed for the highway—hitchhiking back to Albuquerque.  But again and again his father came and found him—and “hauled me back to Taos.”

One day that Mondragon defines as life changing, he went to a basketball game with a new friend.  His friend’s girlfriend came with a friend of her’s—and Mondragon found his life partner.  “She has been amazing, and our four kids give us challenges and love every day.”  They have been together for 24 years.

Mondragon was not immediately changed. One time when he was on a bad cocaine trip, he almost died.  But he came back, and when he saw his wife’s face he declared, “I will never ever do that again. And I haven’t.”  He also knows that he wants a very different life model for his three boys and two daughters, than he was shown growing up.

Mondragon has had a series of jobs—in construction, in forest fire fighting, as a dishwasher and a cook.  He owned several businesses, including a moving company and a cigar business.  When asked what was his most rewarding experience, Mondragon answered that it was actually a volunteer position with the Taos Volunteer Fire Department. 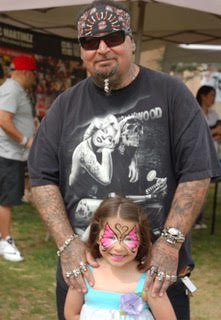 James and his daughter at an NVW anti-bullying session

“I was able to give back to the community instead of just taking, and I really like that.”

And Mondragon has been continuing to give back through his work at NVW—first as one of our Gang Resistance is Powerful (GRIP) coordinators providing classes in elementary and middle schools settings and then, starting in the summer and continuing into the fall, as an educational assistant in the Familia y Mundo therapeutic summer camp and after-school program.

Mondragon can see his own experiences reflected in the questions and behaviors of the kids he sees.  Some of them quickly see that he understands the things they are experiencing and can sympathize.  He likes to gather kids in an informal environment such as the playground or on a hike, and suggest something like, “Let’s tell scary stories.”

And they do. At first, the stories are from the media—but pretty soon they are telling their own stories.

“They are often hungry or scared,” says Mondragon, “and when they share the reasons, they become more bonded to each other.”  Mondragon always emphasizes the confidentiality of these shared stories and tells the kids, “I am speaking from my heart—but it is just to be kept in our own circle.”

Over the summer, Mondragon saw the youth open up—become more trusting—reach out to share and play with each other.  When they first arrived, they were “rough”—taking turns or giving to others was very difficult.  Later, he would hear them invite each other for overnights and share stories about their life.

Both of Mondragon’s parents were tough—his father kicked heroin all by himself—his mother fought pancreatic cancer for four years. He is proud that he had repaired a good relationship with both of them.

When asked what advice he has for parents today, he was quick to say, “Tell them No sometimes. Life isn’t all easy,  and giving kids anything they ask for is not realistic training for an authentic life.”

And he is delighted to have the opportunity to be where he is with “his” kids, at NVW.

NVW has the largest behavior health staff in northern NM.   WE can be reached at 575-578-4297 or nonviolenceworks.us.

Mary McPhail Gray is the board chair of NVW and can be reached at 575-779-3126 or McPhailconsulting@gmail.com